The Kings of the Canadian Truck King Challenge

In the 2007 Inaugural running of the Challenge we had seven categories of trucks in all. Here is the Winner list from each category: 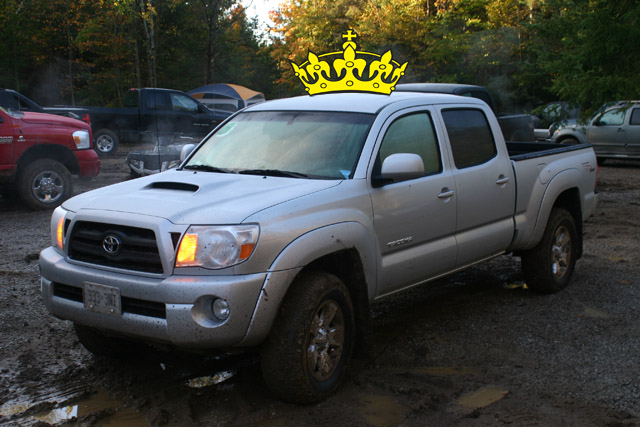 The Overall Winner Of The 2007 Canadian Truck King Challenge

The winner of this first Canadian Truck King Challenge was all new just two years ago and I remember that my first impression of that Tacoma had to do with it’s size. Up in the Ottawa valley that day the eighth version of Tacoma loudly proclaimed that Toyota was no longer happy playing in just the compact truck market.   Its customers had said size mattered, and they obliged.

All the new versions of that Tacoma were larger. Doublecab models with automatic transmissions added 51.5cm to their length while even shorter Access Cab models grew by at least 15.4 cm. But, there was also a whole new interior and engines too were enlarged in this remake – an example of which powered our winner. So two years into it’s latest life cycle our 2007 winner is this new bigger Tacoma Doublecab TRD 4WD powered by a 4L, V6 that (replaced the 3.4L engine) makes 236 hp and 266 ft. lb. of torque.  With this extra power and larger body Toyota also upped the towing capacity on the Tacoma. On the 4WD V6 version the new tow limit is now 5000/2,268 kg up from 3500/1,587 kg. 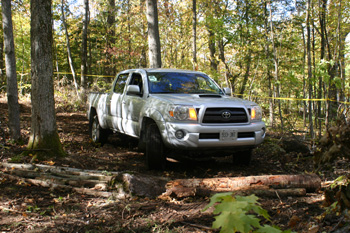 The Toyota Tacoma Running the Off-Road Course at IronWood.

Along with Tacoma’s new body came a new interior giving Tacoma a richly outfitted look along with new standard features like a six-speaker AM/FM/CD sound system, front bucket seats, tilt/telescopic steering wheel, front and rear cup holders and carpeting on even the base model. New storage compartments were added and the rear seat backs were redesigned to fold flat in the Doublecab models for flexibility in carrying people or cargo.

An interesting feature is Tacoma’s new 155 cm cargo bed that is made of a composite material. It’s lighter than steel yet more durable, says the company, and it resists impact damage and won’t rust.

Also in that new bed you’ll find a removable tailgate, integrated side storage boxes and a very trick (optional) 400-watt (115V) power outlet. The point of course is to let you take your power tools into the field and run them off the truck. The manufacturer points out that to realize the full 400-watt potential draw the truck must be running. I’m sure there are a few portable generator suppliers who will be less than happy to hear about that option. Also, on the bed wall is a standard utility rail that offers two-tier loading.

For 2008 we added a category, the work truck category, meant to test the market offerings for the consumer who plans a bare bones truck offering meant for work purposes.

Here are the category winners for 2008 (Click the Category for scoresheets): 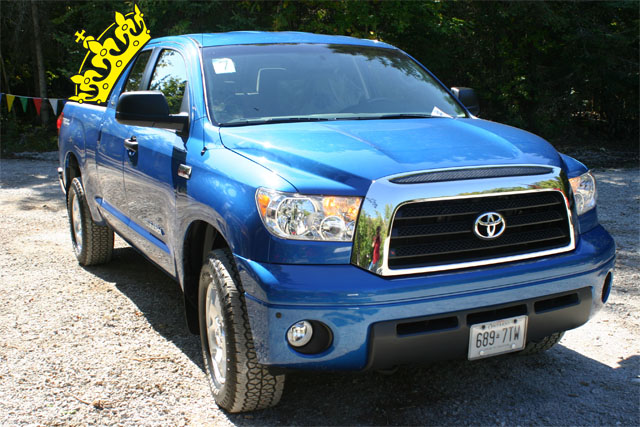 The full-size Toyota Tundra was designed in California, engineered in Michigan and built in a billion-dollar plant in Texas. In fact this Tundra is so new that the only thing it shares with its predecessor is its name. And for good reason – the last version was branded as just “7/8 of a real truck”.  So, this time Toyota went big.

It has a new 5.7L V8 engine that features an aluminum block that uses dual VVT-i technology to control valve timing on both the intake and exhaust valves. It cranks out 381 horsepower and makes 401 pound feet of torque; figures that easily catapult it into the number one position among its half-ton competitors.  Equally new is the six-speed automatic transmission it’s coupled with. This powertrain combination also allows for a new tow limit – 10,000 lb which puts it in contention for the top spot in its market.

Toyota currently lists a total of 31 possible model combinations for Tundra – far fewer than any of the Big Three offer – but a serious first effort. Tundra will be available as a two-door Regular Cab, four-door Double Cab with front hinged rear doors and an extended four-door cab called CrewMax. This last one mimics the MegaCab introduced by Dodge last year; with its oversize rear doors and stretched cabin its rear seat backs that even recline. Bed wise, there are three lengths available, including an eight-foot box.

While there is a 4.7L V8 offered, this hold-over engine is merely a place-holder till some new power can be built. For Tundra to be a real contender they need at least two more engine choices, a heavy duty model and a diesel.

Inside the Tundra hits all the required trucking high notes; such as large amounts of storage – including dual glove boxes – ample cup and bottle holders, overhead console with storage, large controls with an obvious functional design; oversized front armrest that flips up to reveal a map holder, power outlet, space for hangings file folders, drawer for pens and business cards and a box large enough for a Thermos. Storage space is also found in the door panels, behind and under the seats – which also expose armoured backs for when they’re folded down.  Convenience and luxury items, including leather seating, are packaged appropriately within the three trim options.

In 2007-2008 we saw pickup truck sales across North America fall by around 300,000 units. But despite this purchases continue and such top 1.6 million trucks in 2008.  Nevertheless one of the casualties of the downturn was that a battered automotive industry was unable to mount a Canadian Truck King Challenge in 2008 as it had done previously ’06 and ’07. We tried to no avail to amass the trucks we needed, but with the state of things in 2008, the challenge could not be carried out.

Thanks to the recession, the 2010 Truck King Challenge was also a scaled down version of the original test. Because of this, we decided to call the 2010 version of Truck King the 2010 Canadian Truck King Comparison. We took out the four major half tons of the day and compared them head-to-head. No winner was named however. We are still happy to share out findings and results with you.

Click Here To Read Our Observations on all the Trucks 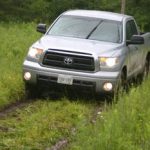 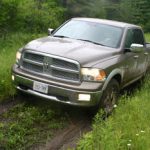 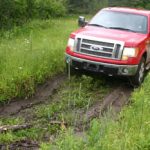 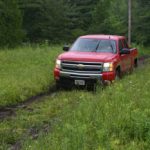 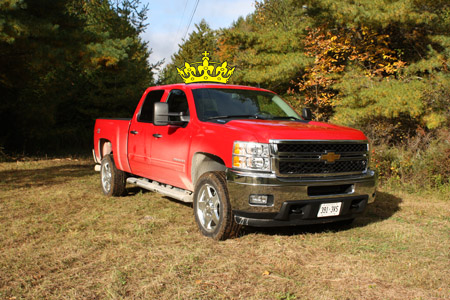 Our third-place pick debuted with all-new tin and a great new interior. Much of the improvements came from the latest half-ton Ram, itself an award-winning design inside and out. Our tester was equipped with the veteran combination of a six-cylinder 6.7-litre Cummins turbo diesel (providing a stout 350 horsepower and 650 lb-ft of torque) and six-speed automatic.  Unfortunately veteran is also code for oldest.

Our Second Place pick: Ford F350 * *(An F250 was not available, however with the exception of the increased load limits on the F350 the truck is identical to the 3/4 –ton version.)

This 2011Ford is by far the most extensively upgraded version of the SuperDuty ever. All new engine, all new transmission encased in the most powerful chassis the line has ever released. This is great and scary – all at the same time. The potential for a great truck is there, however prudence suggests that with this many new components a period of time is needed to make sure they all mesh in the real world.

Just out of bankruptcy when this truck was released last spring means it’s vitally important to Chevy’s health – and GMs overall. That has to be at least one strong reason for the massive improvement in strength of the chassis and the leap forward in the electronics. The body got little attention, but in this world that is the least of buyers concerns.

For the 2012 Challenge, we switched things up again. For this year we took the trucks on the road over two days of all day long intensive testing. This year we towed 8,000 lb travel trailers, loaded 1,800 lb of shingles ran the trucks off-road and yeah, even empty. Two long days and 3,000 km of testing later the five saddle-sore judges crowned the Ram 1500 Truck King for 2012. 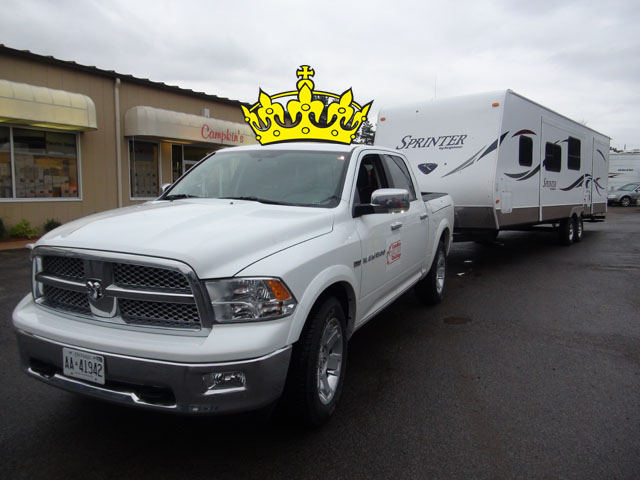 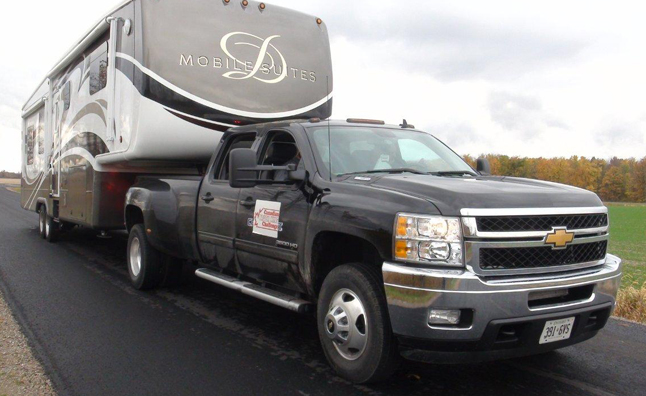 Once all the numbers, driving opinions and fuel calculations were added up the 2013 Chevy Silverado was named this year’s Canadian Truck King Challenge winner.

Testing for the 2013 challenge was conducted in and around London, ON in southwestern Ontario. The first day we ran the trucks empty from Toronto (200 km) to London – then we hitched them to three similar fifth-wheel RV trailers. These weighed in at around 14,500 lb each. We than spent the day doing a 400 km tour with the judges (of which there were five) switching up every 80 km.  Each judge therefore was able to spend at least an hour hauling with each truck – plus being a passenger on two legs where they were asked to evaluate the interior design, comfort and conveniences in each truck from a crew perspective.

It’s worth mentioning right here that this is the fifth time we have run the Canadian Truck King Challenge in the last six years – only skipping 2008 – when the industry was in crises.