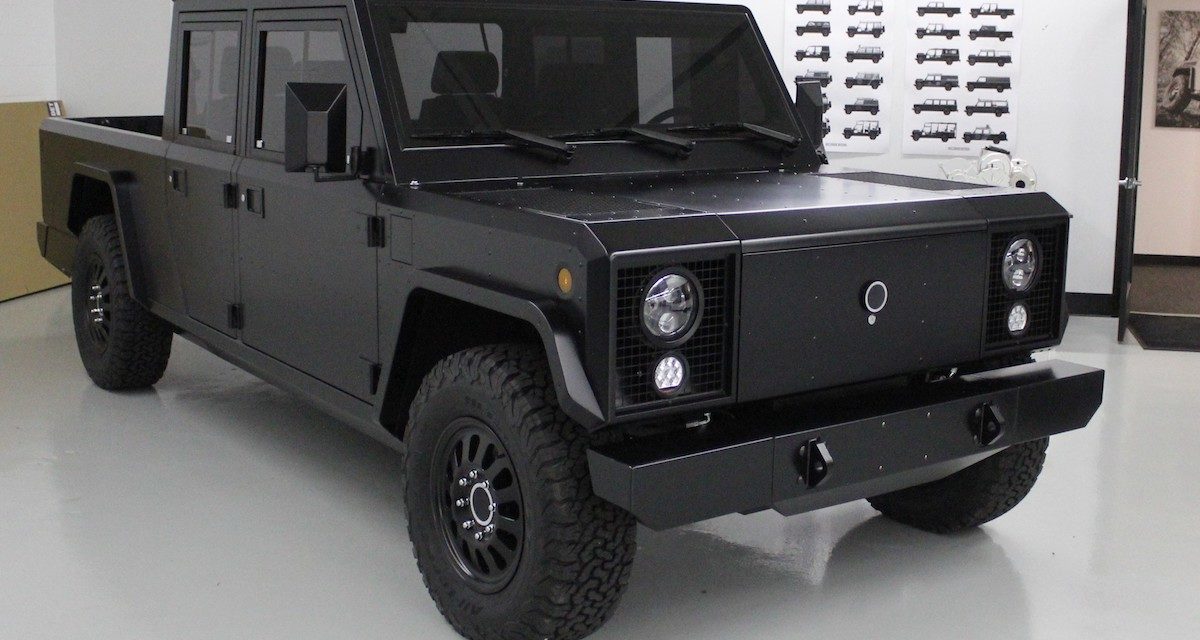 Will your next pickup truck be electric? It’s a strong possibility as several companies are moving quickly to bring electric-powered pickups to market.  – including the major Detroit builders.

I recently visited one of these companies in suburban Detroit to see just how far along its electric truck development has come.  The company is Bollinger Motors, and yes, there is a Mr. Bollinger; a man who put up his own money to bring a new kind of pickup to market.

According to the company website, Robert Bollinger spent his childhood drawing cars and dreaming of his own car company. He attended Carnegie Mellon and earned a degree in Industrial Design and was planning to further his education at an automotive design grad school. Instead he found himself in New York City working his way up the advertising ladder, becoming a creative director. He then partnered with a friend growing a very lucrative hair care company. With the successful sale of that business he moved to a farm in upstate New York. Once again, he starting dreaming of building his own car, however he decided he wanted a truck for farm use instead.

With that use in mind he started designing what he thought would be a very practical pickup.  Interestingly his choice of electric power as the mode of propulsion wasn’t born of a rabid anti-fossil fuel attitude. Instead he found early on that using off-the-shelf electric components was a cheaper and faster way of getting his truck to market.

At Bollinger’s headquarters a rolling B2 pickup chassis is on display – work continues but I can see it’s almost done.  What I saw there was a truck design that can be described as the boiled down essence of practicality. Its square body is built for service and its frame, suspension and drivetrain will haul people, payload and go just about anywhere.  In fact, once you get past the whole electric thing, – this appears to be one tough utility truck.

Looking at the B2 I was struck with its box-like build which to me is reminiscent of a Mercedes G-Wagon or old-school Land Rover Defender. Good company to be in.  However, this is not a steel shell; as weight is the enemy of any electric vehicle the B2 features an all-aluminum body. It has four standard doors, seats four passengers and has a 6-foot cargo bed.

However, it has a few smart features that will add to that space including a lifting rear glass and a fold-flat mid-gate panel that opens up the bed to the interior. The rear passenger seats are also removeable to create even more cargo room. Oh, but there is more.  Because the hood does not cover a traditional engine it lifts to reveal another storage space (a 14-cu. ft, “frunk”).  This space also has a rear access door through the firewall which, when open, creates a 16-foot long pass-through right to the rear of the cargo bed.

Inside the IKEA-simple, clean design continues. Everything is flat or square. Controls are knobs and toggles, all well placed and easily used. Bollinger engineers seemed to find simple, yet elegant, solutions for all the accessory needs.

The feature that struck me was the window defroster – rather than using a larger in-dash vent selector and complicated powered duct diverter, the B2 employs a perforated cylinder that runs the length of the dashboard that spins by hand. If you need defrost – you turn the holes in the one-half of the cylinder upwards, towards the glass. Want it off – simply spin back, till its closed.

Still, its not all low-tech. Above your head is a four-panel, removeable, full glass roof – they have invested in some very eye-catching features.

What was hard to see on the floor model was the drivetrain. Most of the components are run through a raised tunnel that runs the length of the truck. In fact, looking under the truck revealed a clean that is virtually flat; which explains the extra ground clearance.

For the B2 that is 15 ½ inches at the wheels (individual wheel travel is also 10-inches) – because these electric drive components eliminate low hanging axle supports and prop shafts. So, with that kind of clearance you’d expect some decent off-road performance.  It doesn’t hurt that the B2 has four-corner air suspension, less underside hardware and the ability to raise and lower itself.

So, now consider that driving those wheels are two electric motors – one driving the front wheels the other the rear set. Each electric motor has an output of 300 hp and 668 lb-ft of torque and spins at up to 15,000 rpm.

It has a typical two-speed transfer case and 2/4WD selector. With that much power pushing through wheels it should be a serious off-roader. So, while the default drive mode is a slip-n-grip all-wheel drive setup – on-road or off – both front and rear axles come with lockers. This elevates the truck to Jeep-like ability.  In fact, I noted that the B2 is actively taking a page out of Jeep’s marketing book by offering an unbuttoned driving experience – its doors, windshield and glass roof panels are all removeable.

So, while its crawl ratio will be substantial it’s no dog on the highway.

Stopping the truck will be vented inboard disc brakes (11.75-inches). They are also anti-lock. The tires I saw on the demo model were BF Goodrich KO2’s – aggressive and 33-inches tall; apparently these will be standard.

Bollinger engineers then talked to me about the key concern anyone buying an electric truck will have.  In a word – range.

According to them the B2 is equipped with a 120 KWH battery pack which will have an effective battery range of 320 km on a full charge.   Once depleted the truck will recharge at various rates depending on what kind of charger it’s plugged into.  The more common one (Level 2) will utilize 220V power and restore the battery in 8 to 10 hours.  If a Level 3 (called a DC Fast) charger is available this time can be cut to around 2 hours.

Here are the B2 specifications and capacities:

Bollinger says that the B2 will have a payload rating of 5,000 lb and a tow rating of 7,500 lb – Bollinger also says that they will submit the B2 for the required SAE J2807 load testing that will verify and certify its payload and towing capacities – just like the big boys.

Pricing? Bollinger says that the list price will start at $125,00, so this truck won’t come cheap.

So, while I was not able to drive the prototype I was crawling through – Bollinger says that day is getting closer.  There stated goal is to have a full production-built unit ready for the 2021 model year – so, a B2 available for purchase a year from now?  Maybe.

The key piece to the rollout puzzle is finding the right facility to put the trucks together.  That is what they are doing right now – actively searching for an established partner with an existing production facility to assemble the B2. I wish them luck.

A variety of optional equipment is also planned for the B2 – such as a front-mounted winch and the fact that it will accommodate standard snowplows.  But the best one I saw was a tongue-in-cheek line item in the brochure.  Ten 110V outlets come standard – after all, it is an electric truck.