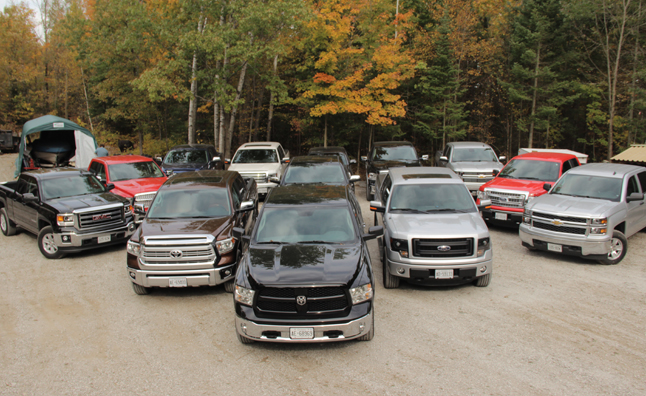 2014 is going to be a big year for Ram; the work they have been doing for at least the past five years is all coming together now.  Their technology, design work and will to take chances are crystallizing in a truck – a unique pickup truck – an event that comes along maybe once in a decade.  That’s this year’s winner.

The overall points winner of the Canadian Truck King Challenge is the 2014 Ram 1500 powered by the 3.0L EcoDiesel with 8-speed transmission.  This is a revolutionary setup – one that is going to copied very quickly – but past this; it deserves credit right now. It takes guts to be the first and this small diesel from Ram works very, very well.

In our under 45K category the 2014 Ram 1500 powered by the 3.6L Pentastar V6 with the 8-speed transmission took first. It speaks to the other holy grail of truck ownership – power, capability with decent fuel economy.  There was a time when this was simply impossible, remember?  Not anymore. In large part this is due to the 8-speed gearbox – again a revolutionary step forward. In the HD category it was the 2500-series Ram equipped with the 6.7L Cummins diesel that won out.  This year the whole chassis was upgraded and strengthen and the engine tuned up. It also now uses the DEF fluid for clean combustion.  A hat-trick for Ram.

But, it has to be noted (and the tale is in the numbers of each individual tested truck) that all the scores were close – so very close. That means that we, as truck buyers, are lucky. The fierce competition among the builders has produced a fleet of iron where no truck is bad. In fact they are all good; and the ones that are better are better by small increments – not by leaps and bounds.

And that’s where it gets tough when judging these trucks. As in any contest there has to be a first and a last – even if the difference between them is measured in the thousands of a —.

Past this – what I can say – no, what I insist on you knowing is that the testing is rigorous, tough and unbiased.  This is not a beauty contest and the automotive journalists, who are the judges, (together) have over 150 driving years of Canadian trucking experience.

As for the ground we cover – well, look at the photos – it always seems to be muddy.  Yes. It rained; it always rains. Seven years I’ve been loading, hitching and driving pickup trucks in the rain – and this year was no different. I’ve come to call it the curse of the Canadian Truck King Challenge but then perhaps it’s just a reminder that when I set out to create a real-world test for trucks rain and cold would simply be a part of it.

This is why truck owners can believe in these results. What we do each year in September is no different from you do every day of the year – and that’s the point.  So, the rain, mud and cold are a vital part of testing; my judges and I have to feel what you feel, content with what you content with and ultimately appreciate what you appreciate, and judge each feature all the way.

As in years past we tested at my IronWood site in the Kawartha Lakes region of Ontario. We use a public 19-kilometer test loop that consists of a hilly gravel road, broken twisting asphalt and a smooth highway section. We take trucks out in groups of five and drive them round and round – switching drivers on each circuit till all five judges have driven all five vehicles. The trucks are always used in the same condition; as in all empty, all towing or all with payload. There is no better way to compare vehicles, even though it does sound low-tech.

It took us about 2 ½ hours to do a complete back to back test; then back to the yard for the next five. We do this over and over for 10 hours a day for two days, making notes and scoring along the way.  And while 19 kms doesn’t sound like much by the time we are finished, collectively, we drove over 4,000 kms.  Is there chatter among the judges?  Of course, just like real owners, we gush over what we love and spit out what we hate. This discourse softens some opinions, changes or hardens others – just like with real Canadian owners.

And, yes we do take each truck off-road. This is the shortest test. It’s done on a kilometer-long off-road course I built myself.  It consists of muddy hills, rock strewn fields, a water-filled trench and a dug, off-camber test which gets the wheels in the air.  It’s about as tough as any real-life situation that 99% of owners would ever find themselves in.

One high-tech addition this year was the installation of data readers in each truck. A third-party company (recommended by Natural Resources Canada) called MyCarma had a technician on site both days to record and interperate the fuel economy data that these readers recorded.  We made a point of recording each truck in each condition. Empty, loaded, and towing.  The resulting figures are as real-world as they get.  These numbers are not computer generated off a dynamometer in some Ottawa warehouse; no they come from the repeated test loops that all five judges make. Look for the graph below.

The HD trucks were tested outside London, ON – these trucks are used differently, so we test them differently. HD owners tow, a lot, and that’s what we do. Each truck was outfitted by the manufacturer with a fifth-wheel hitch and we partnered with Can-AM RV centre towing 14,000 lb fifth-wheel RV trailers over a 300-km route.  The next day we stripped the fifth-wheels out and loaded up 3,000 lb of IKO shingles and set off on a 200-km route.  Once again the judges switched up back to back during the driving.  The results of this testing is also shown in graph form – including the data recorded fuel usage.

That’s how we do it. Seven years and counting.  It’s so much work that every year when it’s over I swear I won’t do it again – till the new trucks come out that is – then I start itching for fall to arrive. 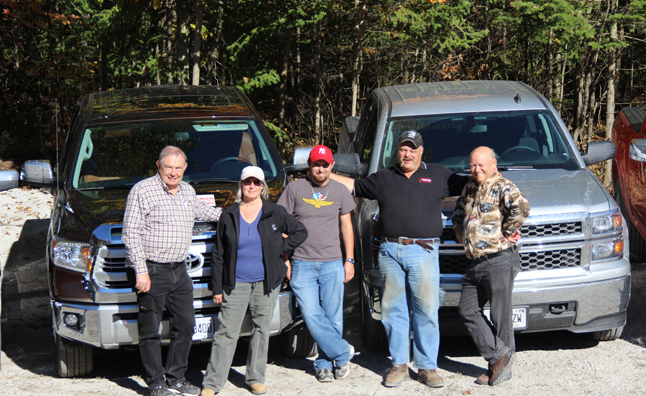