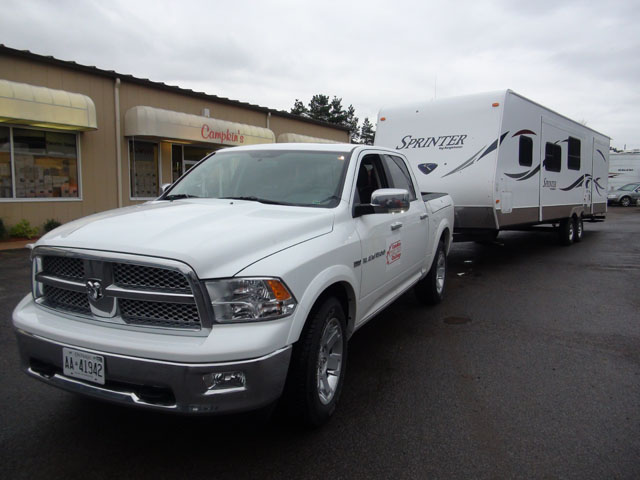 The 2012 Ram 1500 has won this year’s Canadian Truck King Challenge. So there it is; and for some car awards that statement might be enough.

But, you dear reader will want to know why – and that need to decide for yourself is just one reason that you – a pickup buyer is a unique person in Canadian life and culture. However looking past your obvious need for practicality and utility – there is also a love of pick-ups in Canada, particularly the so called half-tons’, that seems rooted in our pioneer heritage and our spirit of self-reliance in this big, empty country. That’s why evaluating trucks the way you use them is the prime mandate of the Challenge and this year is the fifth time we have run this uniquely Canadian Truck King Challenge.

What we concentrated on first for 2012 was evaluating those half-ton pickups that fill the bulk of the market. We had pick-ups from the veteran three – Ford, GM and Chrysler, as well as the Toyota Tundra and Nissan Titan, two trucks that very much want to be thought of as North American.
Next we set up a full tow test to work the trucks. Now we always tow, but this year thanks to partnering with Campkins RV Centre we were able to secure five travel trailers each with a net weight of right around 8,000 lb and do all our towing back to back at the same time.

To be dead fair to all the trucks we also borrowed five brand-new equalizing hitches from Equal – izer. These spread the load across the chassis of each truck and achieved a level attitude for each entire rig regardless of the various wheelbase lengths.

This aspect of a pickups ability has become more and more important in recent years as (according to manufacturer stats) the number of owners who tow regularly has increased right across the country – in fact most consumers will have noted that manufacturers regularly advertise the weight bearing abilities of their vehicles; limits that also seem go higher and higher each year.
I chose 8,000 lb as I knew each truck could handle (according to its published specifications) it yet this weight approached the upper limits set by the truck companies.  Four tons is not peanuts and how a truck tows reveals a lot about the overall chassis and powertrain performance of a truck.

These trucks are picked by the manufacturers. They choose engines, transmissions, trim packages and drivetrain. They also choose how they are equipped and what price range they will fall into.  They know what tests we will run and spec the trucks to their advantage (however they see that advantage).
All our trucks were 2012 models except the Ford which was a 2011; though a 2012 would have had no substantial changes from the truck we did test.

The judges for this year’s competition were average Canadian truck owners. Men and women just like our readers. Ed C is a serving Royal Canadian Air Force Warrant Officer with years of pickup and towing experience. Ed D is a 30-year veteran TTC driver with his own RV towing history. Matt Elmer, a 20-something driver for Waste Management has driven trucks and towed since he was first licensed.
Of course there is me, (it is my event after all) and Jil Macintosh, automotive journalist for the Toronto Star. Jil has been helping me judge trucks since the first Challenge back in ’06.

We five drivers cycled through the five trucks and trailers over a 300 km route that included a long portion of hilly terrain up through the Haliburton Highlands, in heavy rain no less, (which is something we call the “Truck King Curse” we have never had dry weather for the Challenge) and with grades of up to 9 per cent.
A full day was spent towing these trailers on main and secondary roads – with a final section of highway where speeds of at least 100 km-h were maintained.  After returning the trailers we re-fuelled and calculated real-world towing fuel consumption. And that was just our first 10-hour day.
Something else new this year was the spreading of the pain during testing. Wives, girlfriends and one husband accompanied judges and were more than vocal in adding their opinions and observations to those of the drivers – plus they got stuck making all the notes.

Each Truck Bed Is Loaded With 1,800lb. Of Shingles To Test The Bed Payload Capabilities

The second morning the rain stopped, for a while, and we headed to RoofMart in Oshawa, ON where we picked up pallets of singles, supplied by IKO, and drove a 200 km route with this 1,800 lb payload on each of the trucks. We kept track of the fuel consumption during this test as well.
Finally we drove the trucks empty for 150 km and finished with an off-road section that unfortunately, this year, was interrupted by an Act of God.  The abandoned Colonization Road I use near Head Lake, ON was blocked by downed trees. Too bad because it’s a very nasty, muddy bit of off-road.
So as darkness closed in on our second long day of testing the judges agreed that because we weren’t able to cycle everyone through the pickups in the equal time allotments needed  the off-road would not be scored and we dropped the category from this year’s winning calculation.
The results reflect the actual scores awarded by the judges (three categories – 0-10), and their personal overall choices (first through fifth). We have our opinions and you’ll have yours, but we feel that we come by them honestly.