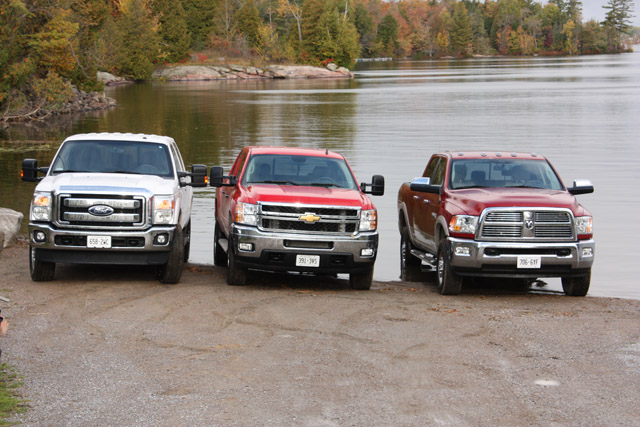 Heavy Duty pickup trucks tow, a lot, says each of the Detroit manufacturers. In fact, collectively, they say around 80 per cent of their customers tow regularly. So, to say that this group of truck owners cares about the towing capabilities of these trucks is to state the obvious. And that’s why we felt this year’s Canadian Truck King Challenge deserved to focus this special section on this HD trait. Below are each builder’s new features as they relate to towing and some real world observations. 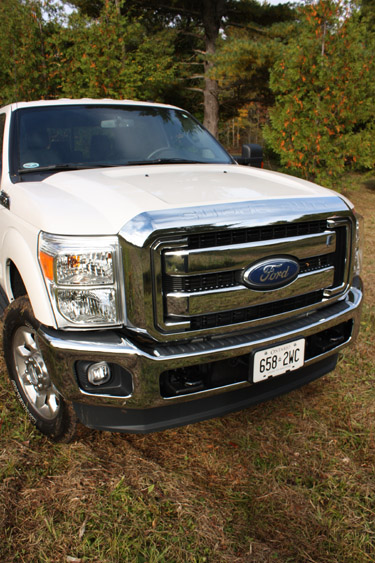 New six-speed transmission has a manual “SelectShift” feature as well as towhaul mode.

For 2011 Ford has increased the size of its bright centre information screen (now 4.2-inchs) to clearly display systems info as well as anything to do with trailer connections.  This is a nice feature and includes automatic reminders for the driver – like checking your lights and safety chains.

Ford has powered/ heated mirrors that extend for trailer towing – with push button control.  Ford also offers a backup camera that also doubles as a convenient way to hook up a trailer alone; not sure if that was the intention but it works pretty well. For trailer power and brakes Ford has standard 4 & 7-pin connectors; however they are located below the bumper. This location gathers more dirt and grime than a through-bumper installation and makes me wonder why they continue to do it.

However, the 2011 Super Duty is the first to offer an optional factory-installed and warranted fifth-wheel and gooseneck hitch. The electrical connection with this installation is mounted in the side of the cargo box, a much better location.

For straight-up brute power the new Power Stroke is probably king – however while towing (8000 lb) the new TorqShift six-speed transmission gave me some rough up-shifts; it seemed to build up a shock-load between shifts, then banged hard. What was mystifying was that it didn’t happen regularly.

Other electronic assists that Ford has included in the new Super Duty are excellent; such as the Hill Start Assist. This used to be included with standard transmissions only – however it dawned on someone that a heavy trailer will pull an automatic trailer backwards just as easily; now it stays planted while you get your foot from the brake to the accelerator. Likewise for Hill Descent Control – it also works with trailers.

But it’s probably the new TSC that is most impressive. Why? Because while it’s the drivers responsibility to keep the trailer straight, there are moments (light, slick rain, black ice conditions) where some wheel spin, or oversteer can get a trailer unexpectedly wagging. It’s at these instant pucker moments that the computer reacts quicker than you possibly can.  I’ve simulated this situation and the truck snapped the trailer back into line pronto. Very nice.  However, as with anything, stupidity can overwhelm even the best engineered systems. That had to be said.

Those who tow know that 4WD is most useful during the first and last 100 meters of a trip. On the pavement you’ll rarely need it, but to get out of the mud; out of the boat launch or pull a trailer out of a wet grass field 4WD is a necessity. For this Ford offers shift-on-the-fly 4WD with HI and LO range. A button also operates electronic rear differential locker and Ford offers manually locking front hubs as an option.

Of note; under load, on both pavement and gravel, Ford’s new steering gear setup felt much more precise than its predecessor. This sensation just added to the confident feel the truck exhibited overall. 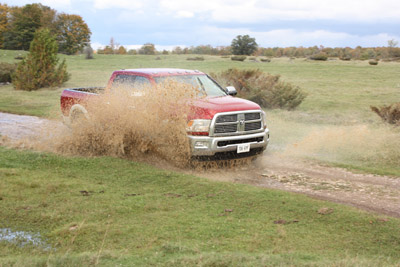 The Dodge Ram 2500 On the Off Road Course

– The 6.7L Cummins turbo-diesel makes 350 hp and 650 lb-ft. of torque with a six-speed automatic transmission.

The Ram drives and tows confidently and comfortably – if anything it may feel a bit “soft”.  I attribute this to the new independent coil spring front end on the truck. However it’s important to note that this feel does not translate to poor steering feel. Under load steering remains precise.  Ram’s power is now the lowest (diesel) among the Big Three, however the veteran Cummins diesel and transmission duo must get credit for good service history and it handles its published weights easily.

Ram has the best mirrors in the bunch; they easily flip-up to resemble the “west coast mirrors” of old. This is a manual operation meaning no power – so no failures; they are however heated. Ram also provides 4 and 7-pin connectors in the bumper – a good protected location.  While my tester didn’t have a backup camera one is available.

Ram was first to offer a button activated engine exhaust brake – this is still standard and works very well while towing.  This brake holds the load on grades saving the brakes. Its operation is also tied in with the selectable gearing feature on the shifter handle making manual downshifts easy.

Ram also offers a 4WD two-speed transfer case (as do the others) however it does not have a rear differential locker. The other noticeable omission is a traction control system on the truck – which in turn means no trailer sway control. This is an area that Ford and GM have made serious strides in and Ram needs to catch up.

The integrated trailer brake controller is well located at the drivers left knee, its readouts are also shown on the screen in the center of the gauge cluster.  This system also monitors trailer connections – for instance: if the light cord comes loose a visual and audible warning is activated. 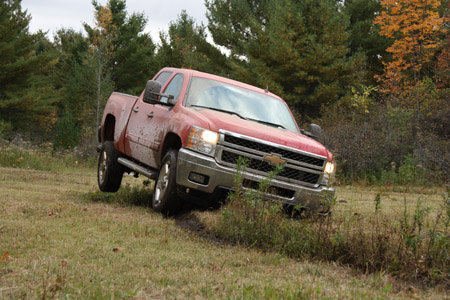 The Chevy Silverado 2500 Running The Off-Camber Section Of the Off Road Course.

– New frame is fully boxed and is five times stiffer.

– The brake rotors are larger

– A new “smart” exhaust brake (on the diesel) is tied into the transmission downshifts via electronic sensors and the brake pedal.

Like the Ram, GM has to be recognized for having a proven powertrain made up of the Duramax turbo-diesel (of which 1.2 million have been built to date) and the Allison transmission.  This gearbox is smooth shifting regardless of the amount of weight towed and on the 2011 it also features a “tap up/tap down” manual shifter on the gear selector.  Also new this year is the smart engine brake (an exhaust brake) that works with the transmission to downshift and hold the load on grades.  This engine brake comes on automatically and when a gear is selected on a downgrade it will not permit an upshift – no matter how sever.

Now with the stiffer chassis, the new Silverado does feel more confident while towing – particularly the attitude of the front-end (which has been radically beefed up) which of course affects steering.  With this added capacity and good on-road feel I found the Silverado HD to be comfortable and capable towing its new limits.

For 4WD GM offers the usual along with a mechanical differential locker built by Eaton.  This gives the 4WD system a goose as the back end slips.

All the electronic systems have readouts that also appear in a centrally located information screen in the dashboard. One of these is the data that is fed back from the trailer brake controller that also features sway control.  Again (as I said with the Ford) this is a feature that can save your butt – and it works well. 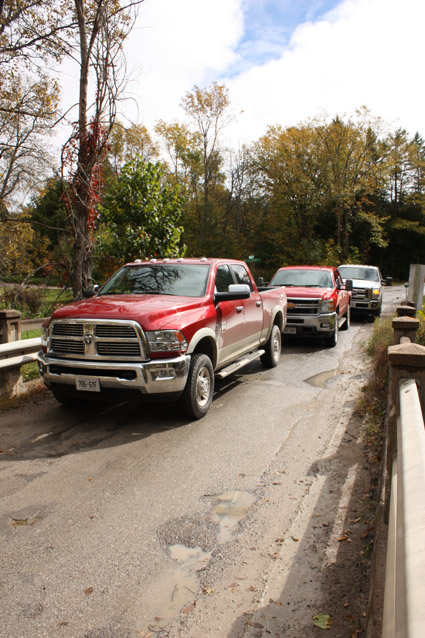 GM has deleted the four-pin electrical trailer connector from its standard hook-up – Ford and Ram have kept both them. Why? However it is well protected in the bumper. GM has an optional back-up camera for the lone driver hooking up a trailer.  So, while the new GM HD trucks are now very much on par with Ford I’d also like to see GM offer a factory-installed fifth-wheel hitch; maybe next year?